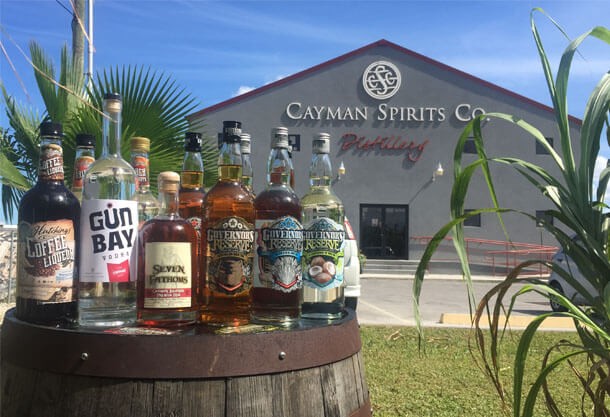 Considering that Cayman Spirits Distillery began with just a couple of friends and a vision of creating an authentic ocean aged rum, it’s safe to say they’ve made some serious waves since then.

Located just outside the airport, Cayman Spirits Distillery opened in 2008 with a goal of showcasing the authentic culture of the Cayman Islands through their Seven Fathoms Rum line.

“By ageing our rum at an exact seven fathoms deep under the sea, we felt like our product had an edge that customers would appreciate,” said Nelson Dilbert, co-owner of Cayman Spirits. “We couldn’t be happier with how Seven Fathoms has been received. Right now we’re currently exporting to the US, Canada, Germany, Belgium, UK and launching in France this year as well.”

Cayman Spirits is very proud of their culture, especially when it comes to the names of the spirits they serve.

“We were inspired to name our Gun Bay vodka after the Cayman spirit that was displayed at the wreck of the Ten Sails where Caymanians swam out to save those in need,” said Mr. Dilbert.

“We also launched our HH Hutchings liqueur line to pay homage to the first commissioner of the Cayman Islands.”

While each line offers a variety of different flavours, there are three things that has made Cayman Spirits Distillery into what it has become today.

“I think we bring an amazing touring experience, along with constantly innovating our products and most importantly promoting the Caribbean spirit to not only Cayman but the rest of the world.” said Mr. Dilbert

“We take pride in being able to interact with customers daily on our distillery tours as well.”

“It’s always a great time seeing the initial reaction of when our customers take a sip of the spirits we make within this island we call home.”

It is for similar reasons that Mr. Dilbert and his team decided to get on board once again for Taste of Cayman 2019, bringing their tasty spirits down to the Festival Green, Camana Bay on April 6.

“We’ve been very involved with Taste for the past four to five years,” Mr Dilbert said, “we even go as far as bringing down celebrity judges for the Seven Fathoms Mixology Competition.”

“We truly love meeting other industry people and more importantly building our connection between them and our local community,” said Mr. Dilbert “We truly cannot wait for this year’s Taste of Cayman and are excited to reveal what’s new on our radar.”

Get your tickets for Taste of Cayman today, so that you can enjoy all the delicious Caribbean inspired spirits that Cayman Spirits has to offer!