Sunday is International Women’s Day, a global day celebrating the social, economic, cultural and political achievements of women. The day also marks a call to action for accelerating women’s equality.

We’re celebrating International Women’s Day by honoring two women who are an integral part of Cayman’s culinary community – Cynthia Hew and Chelsea Tennant. These women are role models for the work they do in championing Cayman’s food scene, they are successful entrepreneurs and business owners, and work every day to advance the Cayman food and drink sector through education, promotion, inspiration and connection.

What does International Woman’s Day mean to you?

A day to celebrate the strength of the women before us who had the courage to have their voices heard.  And, a reminder that their efforts have empowered us to be the best that we can be and motivate, encourage and support fellow women in their role to support gender equality.

Which women are you inspired by in the local community?

It would be difficult to choose just one, but if I were to look at it by generations, I would choose Edna Moyle for her determination as both a single mother, political leader and speaker of the house. She stood tall no matter how difficult the obstacle was in front of her and she was not afraid to break through the barriers that women faced several decades ago.

More recently, I would turn to Sara Collins who leans into whatever life presents her. A trained lawyer, she managed a young family, embraced the role of step mom and built both her career and a blended family while focusing on her dreams to become an international author.

Just when I feel that I cannot take on anymore or cannot achieve a healthy life/work balance, I think of these women, and several others, who motivate me to live by example in the hopes that I may too inspire fellow women.

Which women inspire you around the world?

Founder and CEO of Cook’s Warehouse – Mary Moore – she started her gourmet kitchen store and cooking school several years ago and now has several stores throughout Atlanta. She is also a chef and holds several leadership roles within the Atlanta area.

Barbara Walters – she was one of the first female journalist who inspired me from primary school to study journalism. I had my first debate competition at 9 years old and when asked what, not who, I wanted to be when I grew up I still said – Barbara Walters!

And, Kara Goucher, who is an American long distance runner. I love to run and found Kara reminded me that ‘you are more than what you do’.  I learned that when I was injured for over a year – self-inflicted because I saw myself as a runner and didn’t know how else to see myself, yet I couldn’t even run 100 meters without pain.

Do you think that there are challenges still facing equality for women?  And if so, what are some of the biggest ones?

I do, but not all just due to inequality with men or even transgenders, but between one another. Instead of celebrating our fellow women, I have seen women try to bring other women down due to jealousy or misunderstandings. I’d love to see us lift one another up more often, ask for more information if a fellow woman’s efforts are not clear, send an encouraging word even if you feel they don’t need it.

What do you think can be done to help empower women in our community?

I feel women have a positive leadership presence in Cayman. Women have local businesses, run charity groups, are members of our Parliament…all examples of true leadership.  I’m also very proud that our country takes the time to celebrate women – past, present and future.

I own my own business, but find some negotiations can be difficult where the client or supplier would prefer to deal with a male; however, I tend to enjoy the challenge and rarely does it bother me anymore. Instead, I spend my time in various women’s groups that I have developed organically through the years. Some discussions center around family, kids, homework, while others may relate to business or social schedules. I think it’s important to leverage relationships with other women because we each have something to give and to receive.

In the work-force, I understand there are some challenges, but that’s where we women can help play a positive role and mentor younger women in an effort to eliminate gender inequality in the workforce.

What advice would you give to young women starting out in the culinary world?

Be kind to yourself.  Starting out in any career has its challenges, but it can be really difficult in an industry where you have to show some vulnerability in order to be an honest artist. My advice would be to watch, listen and learn from your mentors, and equally as important, yourself. Watch how you handle yourself when things don’t go as planned, listen to yourself when you have decisions to make and learn who you are and who you want to become by trying new things. And, it’s ok to be vulnerable. If you don’t know something, don’t be afraid to say you don’t know. If you want something, don’t be afraid to ask.

What does International Woman’s Day mean to you?

Though gender equality has improved over the years, ultimately the world we live in is seen through the eyes of men. We have been raised in societies that place so many expectations on women that are in no way comparable to our male counterparts. International Women’s Day is not about pushing a purely feminist agenda, but to continue narrowing the gap of gender inequality and celebrate the women in our lives for all that they do.

Which women are you inspired by in the local community?

Chef Brittani Seymour is not only the sweetest person you will ever meet, but she’s also a master of desserts. I’ve watched her career grow over the years, from working as a full-time pastry chef to making the courageous decision to open her own business, Scratch Gourmet Desserts Ltd, in 2013. After 7 years of building a successful brand she’s expanding her delivery-only business into a storefront making it that much easier for us all to enjoy her whimsical desserts. Chef Brittani is not just a mentor for young local chefs, but also one of the organisers behind the “Women in White” fundraiser which provides a culinary scholarship to an aspiring female chef.

Which women inspire you around the world?

Even before she became a cancer survivor, Chef Dominique Crenn has always been an inspiration. After meeting her a few times at Cayman Cookout I would say that she’s disciplined yet playful, ambitious yet down-to-earth. She came from a small French town with no formal culinary training and is the first female chef in the USA to attain 3 Michelin Stars. She’s demonstrated that your dreams are attainable with hard work, passion and perseverance.

Do you think that there are challenges still facing equality for women?  And if so, what are some of the biggest ones?

The biggest challenge I’ve noticed throughout my lifetime involves gender roles in the household. Women have been taught to be “good wives” who should shop for groceries, cook a good meal, clean the house, get the kids ready etc. That may have been fine when men were the only breadwinners, but nowadays working women have just as long hours yet are still expected to perform the above duties. Sharing responsibilities with domestic chores is becoming more commonplace through communication, but women with kids have it even harder because they barely get a moment for themselves. I know many moms who would appreciate even an hour of help so that they can enjoy an extra long bubble bath, grab lunch with friends or go grocery shopping solo. It may seem small, but those little things make a world of a difference.

What do you think can be done to help empower women in our community?

Women in our community can be empowered simply by surrounding themselves with other like-minded women. You may already have your group of female friends, but what’s to stop you meeting and supporting others in a new way.  For example, discussing motivational books over wine with the monthly ‘Lustic Life Book Club’, or joining a helpful online community like ‘The Real Women of Cayman’, or networking while fundraising with ‘100 Women Who Care’ or volunteering and donating supplies to domestic abuse victims at the ‘Cayman Islands Crisis Centre’.  By participating in these types of community organisations we not only empower other women, but also ourselves.

What advice would you give to young women starting out in the culinary world?

I have three pieces of advice for anyone pursuing the food and beverage industry: 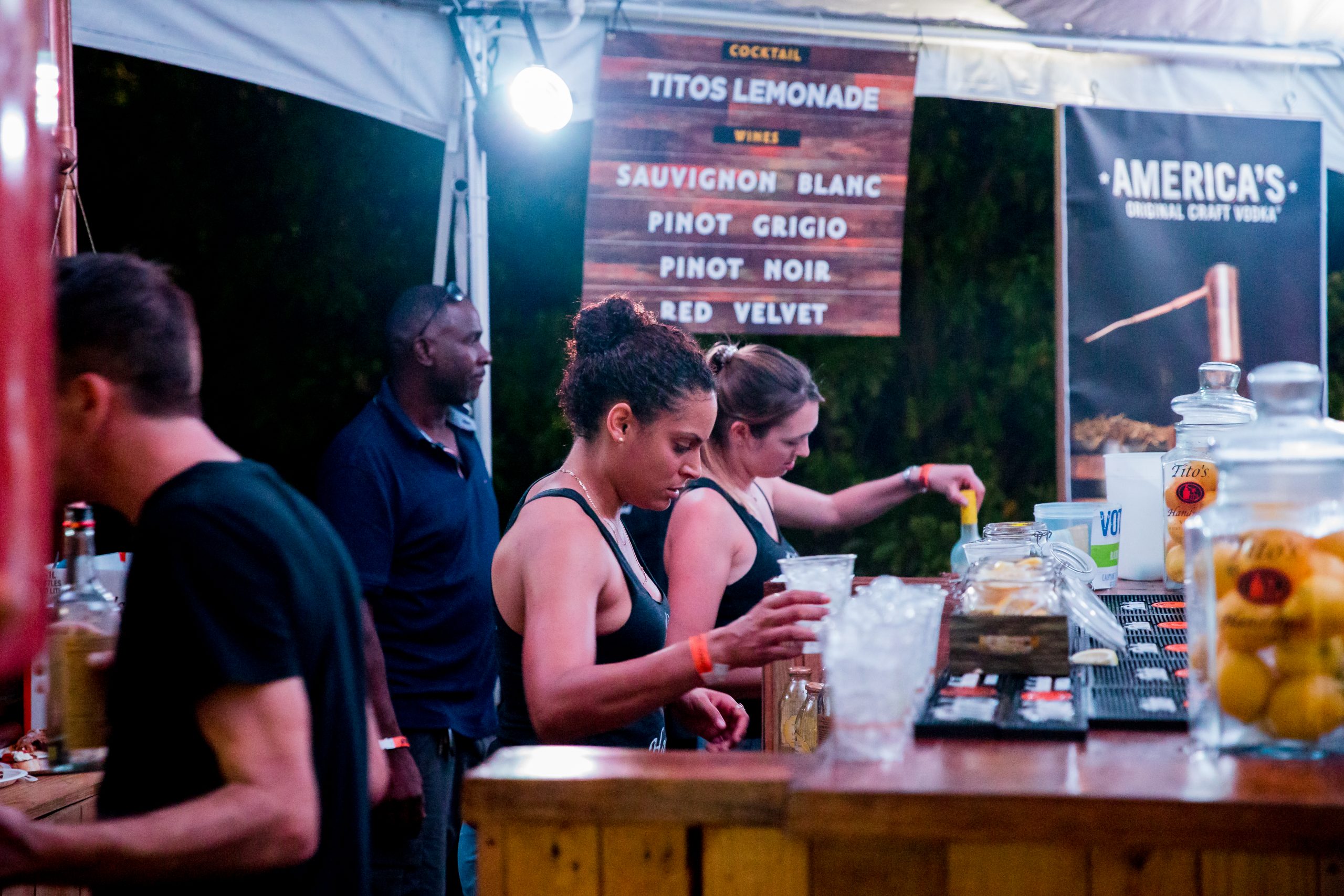 Catch you at the bar!