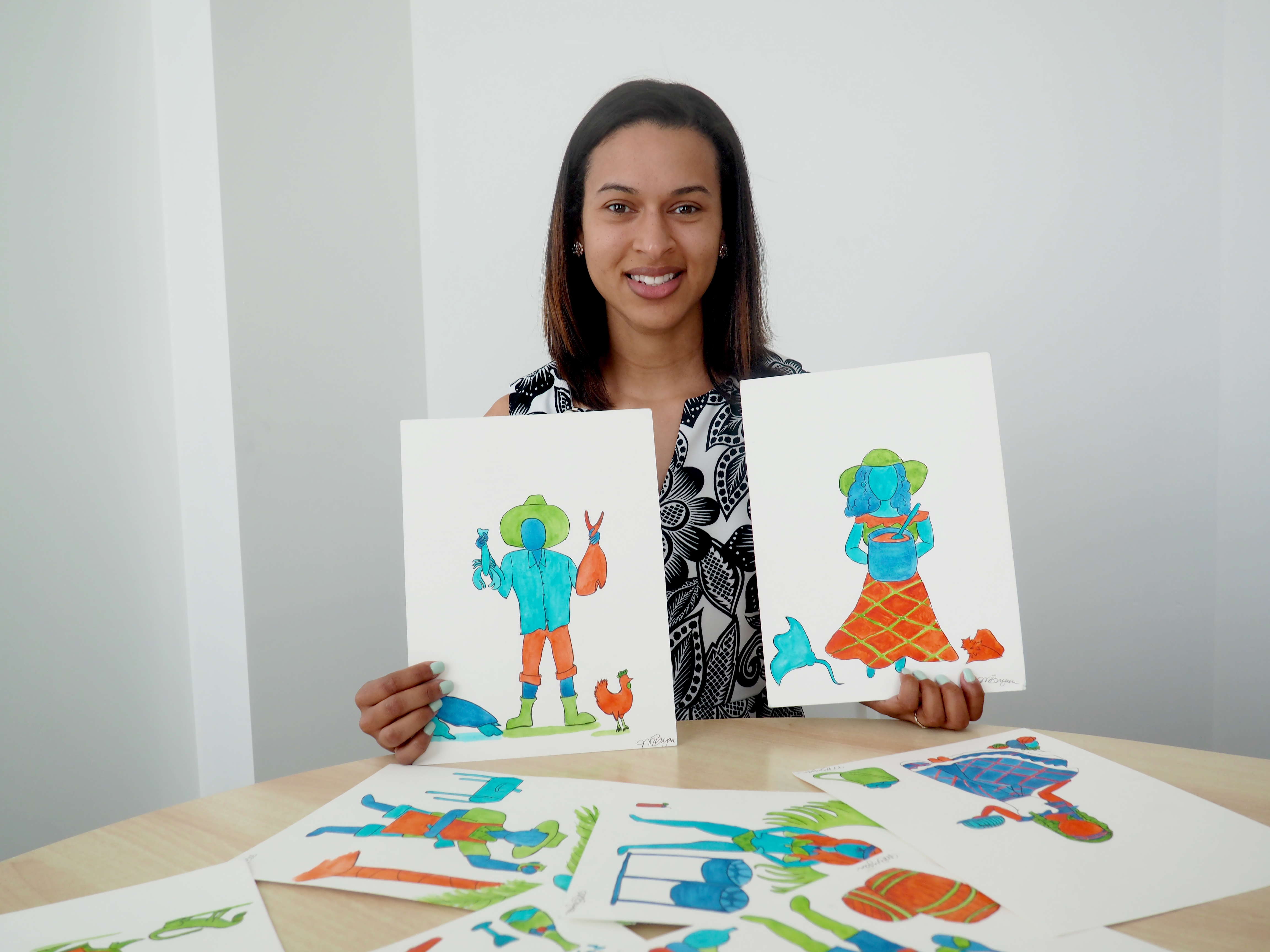 From a young age, Michelle Bryan loved art. She even dressed up as an artist for career day at her school, Bodden Town Primary and her passion for creation followed her throughout her teenage years. However, it wasn’t until 2016, when her husband ask her to design the cover of one of his notebooks, Michelle started to take her artistic talents seriously.

From a young age, Michelle Bryan loved art. She even dressed up as an artist for career day at her school, Bodden Town Primary and her passion for creation followed her throughout her teenage years. However, it wasn’t until 2016, when her husband ask her to design the cover of one of his notebooks, Michelle started to take her artistic talents seriously.

“I am mostly self-taught, as the only formal training I received was in high school,” Mrs Bryan said.

Inspired by the cartoons and animations of Disney, Michelle took to social media to start sharing her artwork on her Michellustrations’ Facebook and Instagram. Her own logo (and favourite illustration) is inspired by a verse from the bible, “For even the Son of Man did not come to be served, but to serve, and to give his life as a ransom for many.” (Mark 10:45).

“Michellustrations is the result of using my God-given gifts to serve God and brighten the lives of others,” Mrs Bryan said.

Taste of Cayman festival organisers have now enlisted the help of Mrs Bryan for the development of a series of illustrations depicting a range of Caymanian culinary characters, including a fisherman and a heavy cake baker, as well as designs of local food and drink favourites, including fruit, conch and rum punch. Other illustrations by Michelle for Taste of Cayman include our national bird, the Cayman Parrot, steal pans, barrels of rum, a palm tree, a caboose, a carnival dancer, a stingray and a bag of thatch.

With her fun, rustic drawing style, her Caymanian heritage and love for the festival, Mrs Bryan was a natural choice for the commission. Her designs focus on the people who have made Taste of Cayman what it is today from years gone by up until the present day.

“The women depicted are inspired by the strong Caymanian women in bygone eras —such as my own late grandmother, Ondina Wood and national hero, the Hon. Mrs. Sybil McLaughlin — who held local society together while the men went off to sea to make money for their families.” Mrs Bryan said.

For the men, Michelle choose to dress some in rolled-up shirt sleeves and pants legs with large straw hats as they would have worn to go fishing to feed their families. Their catches of lobster and fish also make an appearance in the artwork.

“Cayman is also known for its fun and celebrations – whether it’s a boat trip to Stingray City or the Pirates Week and Batabano Parades! I wanted my illustrations to portray the Caymankind and fun of the islands I grew up in,” Mrs Bryan said.

The individual watercolour illustrations went through three rounds of development, sketch, paint and blackline and each took roughly four hours to complete. The colour pallet for the illustrations was selected to not only complement Taste of Cayman’s colour palette, but also replicate the vibrancy of our island.

Taste of Cayman Food & Drink Festival will be held Saturday 26, 2019. Get your tickets now and join us and Michelle in celebrating island life.