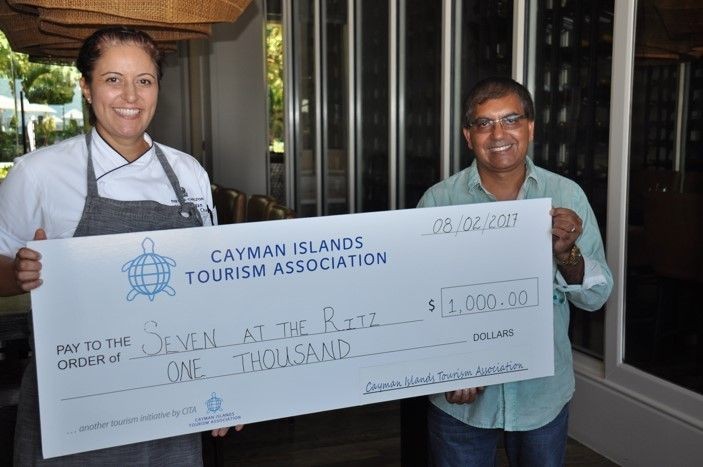 Harry Lalli, CITA Immediate Past President and Chair of the Taste of Cayman committee, presented Pastry Chef Melissa Logan, of Seven at the Ritz-Carlton, with the $1,000 cash prize for earning the coveted title of Cayman’s Favourite Restaurant at this year’s festival.

Seven served up their famous C4 Sundae: a warm brownie with chocolate fudge sauce, smoked Cayman sea salt and molten chocolate ice-cream, to scoop this ‘people’s choice’ award as voted by attendees of the 29th Annual Taste of Cayman Food and Drink Festival.

The C4 Sundae was also crowned Best Dessert by a secret panel of judges. Andiamo at the Ritz-Carlton took the title of Best Food with their Shrimp and Leek Ravioli. Jacques Scott received two awards at the festival, Best Booth and Best Drink. Their innovative Bulleit Bourbon trailer took the award for Best Booth, which in turn served the Best Drink, a Bulleit Bourbon whiskey cocktail served with candied bacon, named ‘Don’t Go Bacon My Heart’.