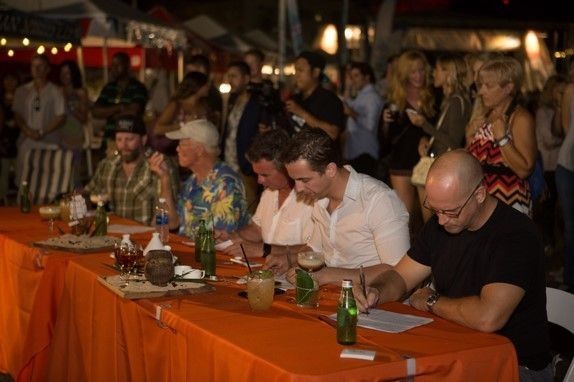 For the second year in a row, Seven at the Ritz Carlton won the people’s choice award of Cayman’s Favourite Restaurant at Taste of Cayman Food and Drink Festival 2017, which was held at the Festival Green, Camana Bay on Saturday January 28th.

Each festival goer was given a wooden token at the event to vote for their favourite restaurant, with the restaurant totalling the most votes winning the annual award. Seven at the Ritz Carlton received the most votes, retaining the title of Cayman’s Favourite Restaurant for the second year running.

The annual ‘Best Of’ awards were chosen by a panel of secret judges, who’s task it was to sample drinks and dishes at each of the vendor booths before making their choices based on aroma, taste, presentation and service.

“This year’s Taste of Cayman Food and Drink Festival saw an abundance of delicious food and drink, as well as beautifully decorated booths at the Festival Green. Whilst the judges had the enviable task of sampling from each vendor, it was no doubt a difficult decision with the huge variety on offer from the best restaurants and bars in Cayman,” Tiffany Dixon-Ebanks, Executive Director of the Cayman Islands Tourism Association (CITA) said.

“The array and quality of dishes and drinks on offer showed that CITA members pulled out all the stops on the night. Taste of Cayman truly brings together the flavours of our island, the culinary capital of the Caribbean.”

The Heavy Cake competition was won by Tara Creary, with Elizabeth Larsen and Kayla Thompson coming in second and third place respectfully. Once the judging was complete, the traditional cakes were shared with festival attendees.

For the first time, the Seven Fathoms Rum Challenge featured international competitors. Winning contestants from preliminary international rounds in New York, Miami and Chicago joined the five preliminary winners from Cayman to compete for Mixologist of the Year. Valerie Balignasay of The Westin and Micah Jensen of Kimpton Seafire made it to the final round, along with Sabrina Kudic of Trench Bar, Chicago, who eventually claimed the title of Taste of Cayman Mixologist of the Year.

Mr. Joey Hew, Councillor for the Ministry of Tourism, Transport and District Administration and Chef Maureen Cubbon, took the title in the Amateur Chef Cook Off with their sweet and spicy soft chicken taco against Theresa Broderick, Vice President of CITA and Chef Jolene Nelson.