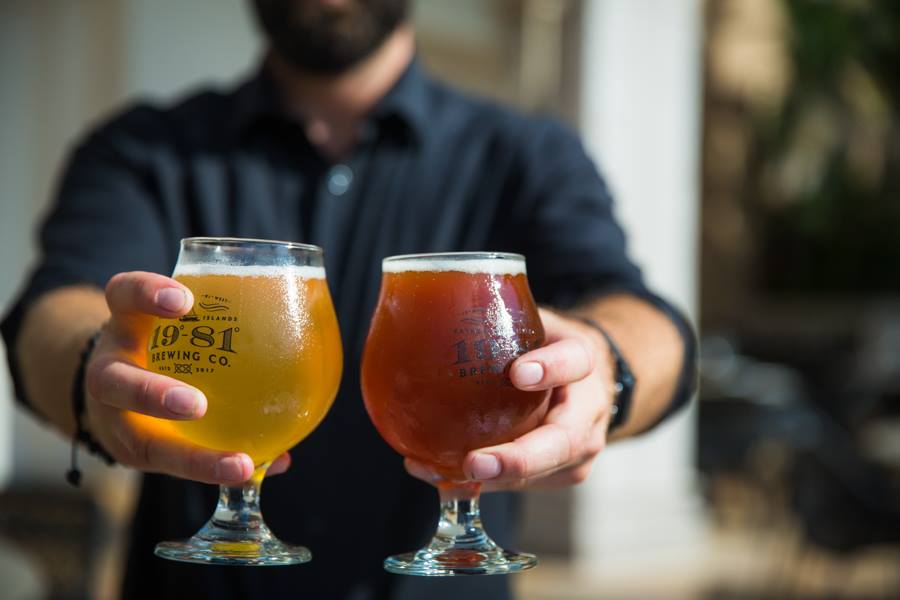 After Brew Master, Jordan MacNevin visited the Cayman Islands on a research trip, he knew there was something missing from the local craft beer scene.

“I felt there was a need for a true IPA in Cayman,” Mr MacNevin said. “So I was keen to introduce another style of IPA that was a personal favourite of mine, and it all blossomed from there.”

Following that trip, Mr MacNevin’s vision was brought to life with the three flagship beers of the 19-81 Brewing Company: Tropical IPA, The Cayman Blonde, and Islands Session.

“Tropical IPA is probably our most popular beer,” Mr MacNevin said.  “It is an East Coast style IPA – and as I hail from the East Coast of Canada, I like to slide it in there.”

“East Coast IPA malt’s sweetness is on par with the hob’s bitterness, which removes the bitterness on the back of your pallet that is sometimes associated with IPAs, making it a much easier drinking beer.”

The other 19-81 beers have also been crafted to ensure a better drinking experience.

“Island Session is a very easy drinking ale, very similar to a lager – step one for getting people introduced to craft beer,” Mr MacNevin said.

“Cayman Blonde is a more crafty ale with caramel and honey malt to make up the backbone of the malt profile.”

Aside from its flagship beers, 19-81 has a selection of limited addition releases that are only available at their tap room, located at 273 Dorcy Drive. A recent release was an oatmeal stout infused with coconut and cocoa nib.

Didn’t get a chance to try it? That’s because these special brews sell out quickly.

Having only been operational since April 2018, 19-81 chose to join Taste of Cayman to put its beers in front of a wider, local audience.

“We are excited for our first year at Taste of Cayman and to be able to introduce our product and showcase it to a wider audience that may not have had a chance to try to it previously,” Mr MacNevin said. “We are aiming to offer festival goers something new they’ve not tried before.”

“We have a couple of surprises in the works for Taste of Cayman. We are focusing on local flavours, inspired with our work with local farmers.”

Get ready for a flavourful surprise when you stop by the 19-81 booth at Taste of Cayman 2019, on Saturday April 6!